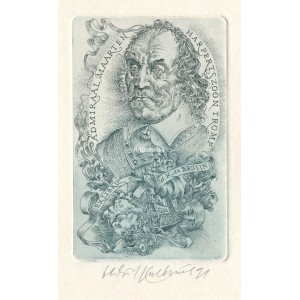 Maarten Harpertszoon Tromp (23 April 1598 – 10 August 1653) was an officer and later admiral in the Dutch navy. His first name is also spelled Maerten.

Born in Brill, Tromp was the oldest son of Harpert Maertensz, a naval officer and captain of the frigate Olifantstromp ("Elephant Trunk"). The surname Tromp probably derives from the name of the ship; it first appeared in documents in 1607. His mother supplemented the family's income as a washerwoman. At the age of nine, Tromp went to sea with his father, and he was present in a squadron covering the Dutch main fleet fighting the Battle of Gibraltar in 1607.

In 1610, after his father's discharge because of a navy reorganization, the Tromps were on their way to Guinea on their merchantman when they were attacked by a squadron of seven ships under command of the English pirate Peter Easton. During the fight, Tromp's father was slain by a cannonball. According to legend, the 12-year-old boy rallied the crew of the ship with the cry "Won't you avenge my father's death?" The pirates seized him and sold him on the slave market of Salé. Two years later, Easton was moved by pity and ordered his redemption.

Set free, he supported his mother and three sisters by working in a Rotterdam shipyard. Tromp went to sea again at 19, briefly working for the navy, but he was captured again in 1621 after having rejoined the merchant fleet, this time by Barbary corsairs off Tunis. He was kept as a slave until the age of 24 and by then had so impressed the Bey of Tunis and the corsair John Wardwith his skills in gunnery and navigation that the latter offered him a position in his fleet. When Tromp refused, the Bey was even more impressed by this show of character and allowed him to leave as a free man.

He joined the Dutch navy as a lieutenant in July 1622, entering service with the Admiralty of the Maze based in Rotterdam. On 7 May 1624, he married Dignom Cornelisdochter de Haes, the daughter of a merchant; in the same year he became captain of the St. Antonius, an advice yacht (fast-sailing messenger ship). His first distinction was as Lieutenant-Admiral Piet Hein's flag captain on the Vliegende Groene Draeck during the fight with Ostend privateers in 1629 in which Hein was killed.

In 1629 and 1630, the year that he was appointed full captain on initiative of stadtholder Frederick Henry himself, Tromp was very successful in fighting the Dunkirkers as a squadron commander, functioning as a commandeur on the Vliegende Groene Draeck. Despite receiving four honorary golden chains, he was not promoted further. The Vliegende Groene Draeck foundered and new heavy vessels were reserved for the flag officers while Tromp was relegated to the old Prins Hendrik.

In 1634, Tromp's first wife died, and he left the naval service in 1634 in disappointment. He became a deacon and married Alijth Jacobsdochter Arckenboudt, the daughter of Brill's wealthy schepen and tax collector, on 12 September 1634.